The surgical fee of Sava Perovic Foundation Chairman Dr Rados Djinovic (JIN-O-VICH) varies for particularly difficult cases, such as men suffering from Peyronie’s Disease, patients who have had previous penile prosthesis surgery by other doctors (fibrotic corpora), and men who have had infections or other complications such as priapism.

All other surgical packages are fixed prices and include every relevant medical expense.

One of Dr Djinovic's greatest recent honors was his election to Chairman of the European Association of Urology’s (EAU) Genitourinary Reconstructive Surgeons Section (ESGURS) in 2015. The EAU is the #1 authority on urological practice, research and education in Europe, representing more than 12000 urology professionals from 117 countries worldwide! He is frequently ranked by search engines as the greatest urogenital reconstructive surgeon in the world.

, UNLIKE penile implants male impotence cures offered by almost every other urologist or plastic surgeon worldwide. The Sava Perovic Foundation enables you to get maximum benefit from the AMS 700 CX cylinder technology — a leader of AMS penile implant prosthesis models. (photos below) 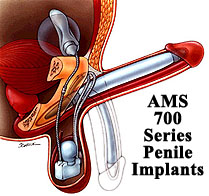 & go to the best urogenital reconstructive surgeon in the world

— not merely look for a doc in a convenient location

Local search is NOT always a good idea.

Unless you live in Belgrade or in Europe near Serbia, you AND your sex partner are likely headed for long-term disappointment & disatisfaction if you start your search for an inflatable penile prosthesis surgeon with:

Men with a very large penis may not put great importance on significant penis enlargement with simultaneous penile prosthesis implant surgery but they probably don't want a substantially shorter, smaller penis. With rare exceptions, all inflatable penile prosthesis surgery will make your penis shorter AND smaller.

Surgeons tend to minimize, downplay, gloss over & understate that before surgery but most American Medical Systems (AMS) patient liaison staff will tell you it's inevitable.

It's true! A penile prosthesis implant will make your penis substantially shorter & SMALLER

— unless you get the surgery from Dr Rados Djinovic of the Sava Perovic Foundation.

For some, he can get the lost size back AND give them a bigger, longer penis, but not all.

And because of the extensive scarring of the first surgery, recovering lost girth or increasing girth can be done only in rare cases.

Best to AVOID losing those priceless inches in the first place & get your penile prosthesis implant done right.

The maximum penis enlargement Dr Djinovic can achieve is 3-4 cm (1.1 to 1.6 inches), depending on pre-operative penile length. The average is about one inch (2-3 cm). Penile skin length prior to surgery can also limit penis enlargement, especially in circumcised patients.

All erectile dysfunction penile implant patients are treated with a combination of several wide-spectrum antibiotics starting one day before surgery. Surgery is usually performed using epidural or spinal anesthesia although general anesthesia can be used if the patient prefers.

An AMS 700 penile prosthesis (CX or LGX) with MS pump or the malleable (semi-rigid) AMS 650TM can also be safely inserted into Perovic Total Phalloplasty Stage Three patients, not only natal men with erectile dysfunction. Penile prosthesis implantation for natal men is a totally different procedure than the one used for Perovic Total Phalloplasty.

Dr Djinovic envelops the prosthetic rods of inflatable penile prosthesis implants, such as the AMS 700 CX, in a vascular graft to greatly decrease the chance of prosthesis protrusion. Because a malleable prosthesis has a higher risk of protrusion due to the permanent pressure of the prosthetic tips, Dr Djinovic highly recommends that patients thinking of getting a malleable implant, instead consider the 2-component AMS Ambicor inflatable penile prosthesis — also enveloped in a vascular graft — that costs about 20% less than an AMS 700.

After surgery, a patient wears a transurethral catheter for 5-7 days.

Penile prosthesis implantation in Total Phalloplasty Stage Three takes three hours of surgery and requires 2-3 days in the medical facility and 5-7 days total time in Belgrade. Cost of an INFLATABLE penile implant is NEVER included in the fee quoted for a surgical package and varies according to brand, model, type and size that the patient chooses. In some packages, the cost of a malleable penis implant is included.

The recommended AMS 700 inflatable penile implant with the InhibiZone Antibiotic Surface Treatment which impregnates antibiotics into the tissue-contacting surfaces of the penile prosthesis costs more than some surgical packages. Other models, types and other brands cost less & can be used if you really want them. 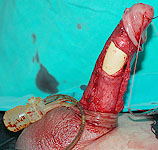